Antibacterial chemotherapy before the turn of the nineteenth century really was a brutal business. A fine line between killing bacteria or the host organism- the human population. Mercury and bismuth based ointments and elixirs were available from apothecaries and administered by quack doctors as remedies, most notably for syphilis- a sexually transmitted bacterial infection caused by treponema pallidum that rapidly reached epidemic proportions in Europe. All of this changed when Paul Ehrlich, born in 1854 in Poland- the so called ‘father of medicinal chemistry’-, pursued his ‘magic bullet’ dream and began experimenting with organo-arsenic derived dyes (used to stain microbe colonies) on t- pallidum infected rabbits.[1] His starting point was the compound atoxyl, prepared by Bechamp in 1859 and shown to have activity against the trypanosome parasite that caused sleeping sickness.[2] Ehrlich systematically prepared, modified and tested compounds in vivo (around 2000 in total) until a suitable therapeutic index was realised- killing the bacteria and sparing the host. The 606th compound tested, or Salvarsan- ‘the arsenic that saves’ as it became known, proved to be the big-ticket item. Eventually manufactured by Hoechst in Germany, it was in use clinically less than a year after discovery (!). It rapidly became the most widely prescribed drug in the world, some of this demand being driven by demonstrated efficacy in other parasitic infections. A structurally modified derivative of Salvarsan (‘compound 914’- Neosalvarsan) had much improved water solubility, reduced toxicity and was easier to make. As a result, it superseded its predecessor as a preferred treatment. By 1920 over 2 million doses of these molecules were manufactured in the US alone.[3] Salvarsan is now known to be a prodrug- in vivo oxidation gives the active metabolite oxophenarsine.

One could argue these weren’t the best molecules to showcase chemotherapy at its best. The side effects were severe- nausea, vomiting and deafness. Ehrlich famously remarked “the step from laboratory to the patient’s bedside… is extraordinarily arduous and fraught with danger.” They do, however, mark a turning point in human history. As we shall see they paved the way for the development of another, safer, class of compounds- the ‘sulfa drugs’.

Before we leave Salvarsan a word about its structure. There has been much controversy over the years about the purity of Ehrlich’s isolated compound and its actual molecular structure. He made the compound in a one-step procedure from 3-nitro-4-hydroxyphenylarsonic acid using dithionite, simultaneously reducing the nitro group to the aniline and changing the oxidation state of the arsenic atom from (V) to (I) (Scheme 1). The material was isolated as a hydrated hydrochloride salt. As we all know- carrying out multiple transformations in one pot can result in variability and formation of impurities.

It’s believed that the material made using this route most likely contained sulphur-based impurities, these having been attributed to observed off-target toxicity.[4] An alternative two-step procedure developed by Walter Christiansen in 1920, in which the nitro group is first reduced with dithionite, followed by adjustment of the arsenic oxidation state with H3PO2, gave cleaner material.[5]

Ehrlich believed the structure of Salvarsan to be analogous to azo (N=N) compounds, and claimed the formula shown above containing a central As=As double bond. Though it remains the reported structure in much of the literature this is no longer thought to be correct. In 2005 Nicholson published definitive evidence for the composition of Salvarsan based on detailed electrospray mass spec data.[6] The compound consists of small rings R(As)n, where n is typically 3 or 5 (Figure 1). The team were unable to separate the individual compounds however, presumably because they interconvert. The active oxide is likely to be a hydrated or condensed form (R-As(OH)2) that slowly releases from the trimer/pentamer mixture. 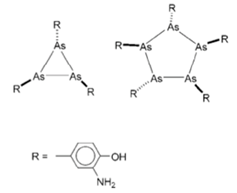 [1] Strictly speaking Ehrlich’s colleagues Bertheim and Hata should be credited for synthetic work and biological testing.

[2] Antoine Bechamp developed a manufacturing process for reduction of nitrobenzene to aniline using iron/HCl- the starting point for the aniline dye industry. A good book history of dyes is ‘Mauve” by Simon Garfiled (ISBN: 1786892782)