Finding generally applicable, more sustainable, scalable methods to construct C-C bonds via cross-coupling is likely to be one of the major challenges that process chemists will face over the next decade. At the moment chemists overwhelmingly rely on pre-formed nucleophilic organometallics (such as Grignard, organozinc and organoboron reagents) in C-C couplings with an electrophile (such as an aryl or alkyl halide). These methods have been extremely effective in building molecules, especially in drug discovery, but often overlooked is that the use of pre-formed organometallic reagents requires stoichiometric metal and is frequently quite atom-inefficient, especially if the organometallic has to be synthesized separately from a carbon electrophile. These limitations are largely overlooked due to the lack of reliable, widely applicable alternatives. This may be acceptable for drug discovery but the large-scale use of these reagents is becoming increasingly problematic as the supply chains of many metals are being disrupted due to geopolitical events, inherent elemental scarcity, and as awareness increases of the environmental challenges to safely mine and dispose of many metals and their by-products.

A much better approach would be to directly couple two electrophiles. This avoids the extra steps and materials needed to generate the organometallic reagent, and in theory enables the use of catalytic metal, however there are numerous challenges that have to be overcome to make this approach viable for process chemists to implement:

In 2019, scientists at University of Wisconsin and Pfizer’s Process Chemistry team, described a first-generation divided cell electrochemical system that addressed some of these issues (Org. Process Res. Dev. 2019, 23, 1746-1751). Most notably they were able to cross-couple alkyl bromides with aryl bromides using a dual ligand system to achieve high selectivity, used catalytic Ni metal with diisopropylamine acting as a sacrificial reductant, and replaced the amide solvent with acetonitrile. The standard conditions that they identified are shown below.

Recently, the same team has reported their reaction development efforts in much more detail, provided a mechanistic hypothesis for the two ligand system, focused on scalability, and demonstrated their best results on gram-scale (ACS Catal. 2022, 12, 12617-12626). The first change that they made was to use an undivided cell because of the following concerns about scale-up in divided cells:

They also eliminated the excess of the alkyl bromide to reduce waste and replaced diisopropylamine with diisopropylethyl amine which enabled them to identify a new set of standard batch conditions summarized in the scheme below. The impact of variations away from the standard conditions are shown in the accompanying table. 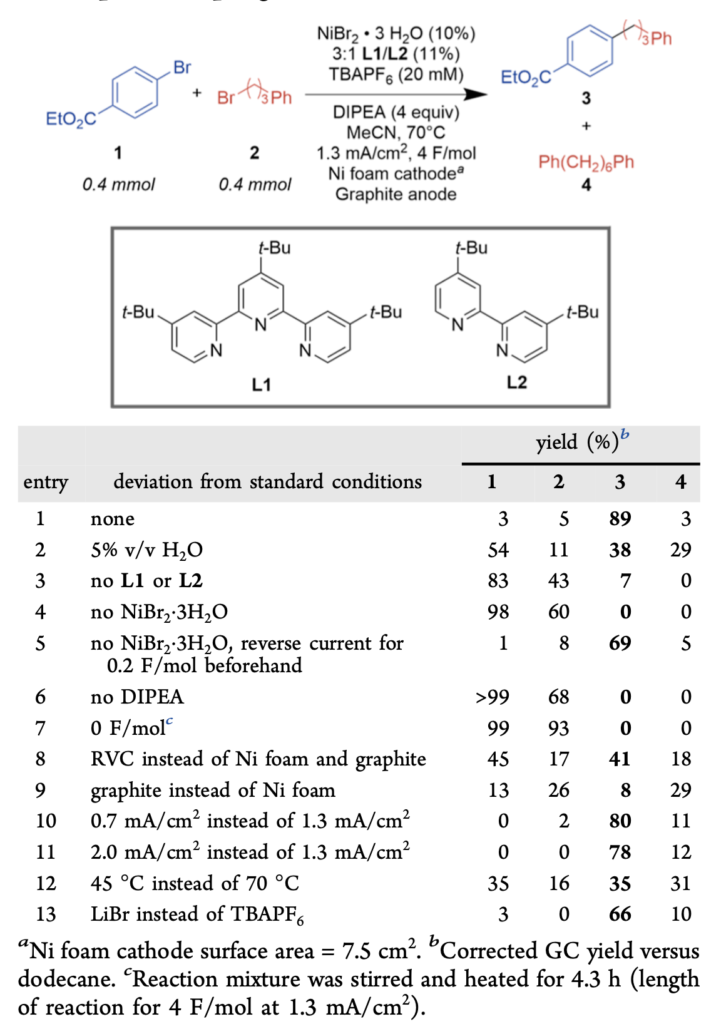 As someone who tried a single (unsuccessful) synthetic electrochemical experiment in graduate school over 25 years ago, I was happy to see that the supporting information contains detailed information on how the equipment for the batch screening can be readily constructed from commercially available materials (see pictures below). If organic chemists are to replace their familiar, but less sustainable, synthesis methods with better alternatives such detailed and clear information is essential to overcome the fear-factor of trying something new. 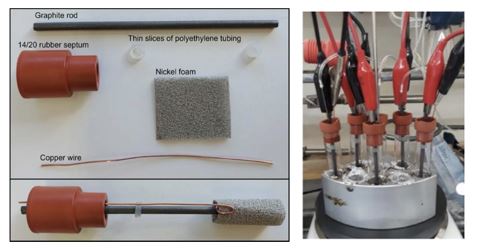 A fascinating feature of the standard reaction conditions is the use of two superficially similar ligands to give reliably acceptable yields across a range of coupling partners. The authors performed a series of experiments with various ratios of the two ligands which showed that: 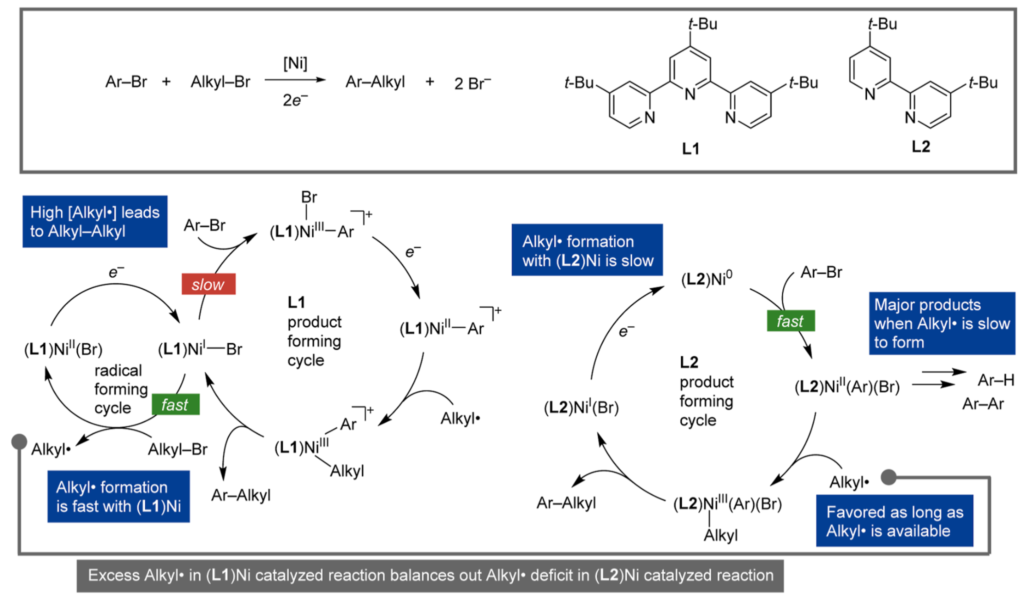 Next the authors show that the reaction has broad substrate scope with regard to the aryl substitution pattern, and the presence of heterocyclic aromatics and/or functionalized alkyl chains. When appropriate they changed the L1/L2 ratio to match the changes in reactivity of the coupling partners: 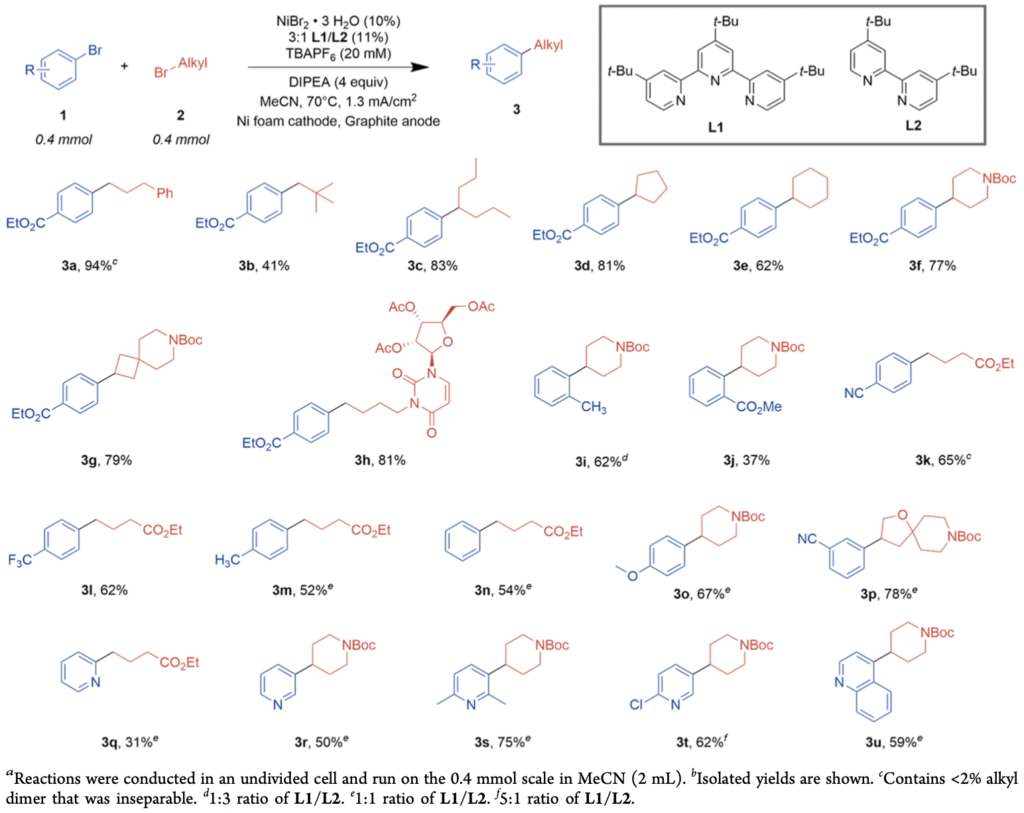 The second half of the paper focuses on the development of a scalable process using flow chemistry. The first change the authors made was to swap tert-butyl substituted ligands L1 and L2 to their methyl analogs L3 and L4 since these new ligands can be much more readily and economically obtained, and were shown to have similar reactivity.

Flow electrochemical cells can be operated in either single-pass (slow flow) or recirculation (fast flow) modes, so the initial studies evaluated how the different flow rates and resulting changes in mass transfer impacted productivity and selectivity.

For the single-pass apparatus the authors found that 10 mol % catalyst was needed to mitigate increased levels of proto-debromination that were observed at 5 mol % catalyst. The best yield (72%) was obtained with a 4 hour residence time and current density of 1.6 mA/cm2.

More effort was put into studying the recirculation mode they found the combination of factors listed below made this better for scale-up:

Ultimately they were able to show that recirculation mode with two cells in parallel was able to achieve approximately 3- to 4-fold higher throughput per unit of electrode surface area than batch or single-pass flow. The authors propose that the improved efficiency of the recirculation mode is due to increased mass transport which allows the relatively slow cross-electrophile coupling to take place outside the electrochemical cell. The electrochemical cell is therefore only required to generate Ni (0) and Ni (I) at a rate sufficient to support the rest of the steps in the dual connected catalytic cycles.

Using the optimized recirculation conditions a 4 g reaction performed using two microflow cells in parallel. This was able to generate 0.27 g of product per hour and the authors calculate that by increasing the electrode surface area to ~1 m2 they could produce up to ~5 kg product per week.

In a final note the team mentions that further increases in the current density required to exceed a few kilograms per week will require improved understanding of the chemistry at the cathode to allow higher turnover frequencies. They are also working to replace the acetonitrile solvent and amine reductant with greener solvents, and they plan to report these results in due course.

These are exciting times for synthetic electrochemistry! What was once viewed as an exotic technique by most organic chemists is entering the mainstream in many process chemistry laboratories and large-scale applications are starting to be reported (see Org. Process Res. Dev. 2022, 26, 2423-2437 for a recent example of a kilogram scale electrochemical oxidation). Hopefully, the revival of synthetic organic electrochemistry will enable a more sustainable approach to forming C-C bonds and many other transformations.