Aryl- and heteroaryl- diazonium tetrafluoroborate salts, prepared by diazotization of an aniline in the presence of HBF4, are unique in that in many cases they are sufficiently stable to isolate. Thermal decomposition of these salts at elevated temperatures results in fluoro-dediazoniation and formation of the corresponding aryl or heteroaryl fluoride- the Balz-Schiemann reaction.1a,bRadiolabelled 18F compounds for PET scanning have also been prepared via this methodology. The thermal decomposition of tetrafluoroborate salts can be highly exothermic and examples of runaway decomposition have been documented in the safety literature.1c In the 1960’s the use of heavier salt counterions/fluoride ion donors, such as PF6–, SbF6–, AsF6–and SiF62-were reported to give higher yields of aryl fluoride products,2 however the isolation of these intermediates poses a significant safety risk.

The salt decomposition is typically carried out in an inert solvent, and as one might expect the solvent plays a role in tempering the reaction.3 Decomposition of a solid melt has also been used synthetically, with concomitant distillation of the fluorinated product. Several modifications of the original process were reported in the 90’s by Yoneda, including formation of the diazonium salt in dry HF / pyridine or pyridinium fluoride / HF- which enabled decomposition at lower temperatures,4 photo-induced decomposition5 and decomposition in triflic acid to give aryl triflates.6 The reaction was later investigated by several groups in the context of ionic liquid and perfluoroalkane solvents.7 Inevitably the chemistry has been run under continuous flow conditions,8including a recent paper by Buchwald.8a  Kilogram scale continuous manufacture of ortho-difluorobenzene has also been reported.8c Attempts to generate the diazonium salt and effect fluoro-dediazoniation in situ using tert-butyl nitrite and BF3 without a Bronsted acid, avoiding isolation of the salt, has had some limited success.8d 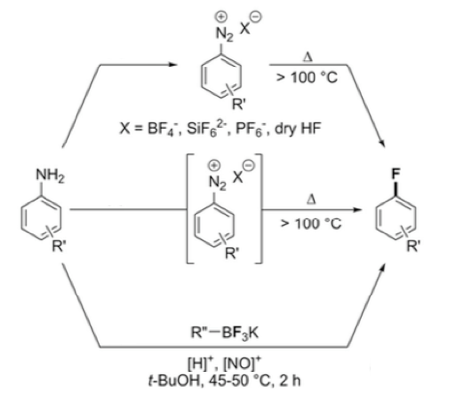 The reaction conditions reported over the years seem somewhat idiosyncratic, most likely due to significant differences in the stability of the diazonium salts. My own experience of this chemistry reflects this to some degree. I remember preparing an aryl diazonium tetrafluoroborate salt with a meta-carboxylic acid substituent- the decomposition of which proved highly exothermic and difficult to control. To add insult to injury the salt was also a skin sensitizer. The project was subsequently abandoned. Ortho-carboxylate substituted derivatives are known to decompose violently with rapid loss of CO2 to give highly reactive benzyne intermediates, however in this particular case themeta– derivative was also unexpectedly unstable.

90 years on and there’s apparently still life in the old dog. The Perrin group at the University of Vancouver, Canada recently described a departure from the traditional high temperature  thermal decomposition method by using organotrifluoroborate salts (for example Ph-BF3K) as a source of fluoride ion in a solution-phase fluoro-dediazoniation reaction run under mild conditions (Figure 1).9 In Situ generation and decomposition of the diazonium salt under the reaction conditions avoids the isolation of hazardous, potentially explosive diazonium intermediates. Aryl fluorides, particularly of hindered ortho-substituted substrates, are obtained in modest yield. The increased solubility of the R-BF3–salts enable the reaction to be performed in solvents not normally compatible with the traditional Schiemann process. The utility of organotrifluoroborate salts, made famous by Gary Molander in his variation of the Suzuki-Miyaura cross coupling reaction,10 are a significant new development in the fluoro-dediazoniation area and I’m sure further refinement of the process will follow.

The mechanism of the traditional Balz-Schiemann reaction has been studied in some detail. The isolated aryl diazonium cation (ArN2+) reacts with fluoro- “ate” anions (such as BF4–) which act as a source of fluoride ion. Decomposition of the diazonium salts follow a first order rate law so are most likely SN1 type processes.11

Organofluorine Chemistry- Past, Present and Future

With a dramatic increase in the use of fluorine and fluorine containing functional groups in drugs, agrochemicals and advanced materials over the past decade, so the demand for safe, robust and scalable carbon-fluorine bond forming reactions has grown. 45% (17/38) of the small molecule API’s approved by the FDA in 2018 contain at least one fluorine atom.12 Development of mild synthetic methods for late stage functionalization of complex molecules has led to advancements in the formation of both aryl- and alkyl-fluorine bonds under mild conditions with high efficiency and selectivity.