Selective N-methylation of amides using (chloromethyl) dimethylchlorosilane / fluoride: Application to the large scale synthesis of a pyrimidone intermediate for Raltegravir

Selective N- v’s O- alkylation of an amide can be challenging and somewhat unpredictable- the outcome being highly dependent on the structure of the substrate. A good example of this is the N-methylated pyrimidone intermediate (5) en route to Merck’s antiretroviral drug Raltegravir.1 Direct methylation of amide (4) (Figure 1) using MeI gives significant quantities of the isomeric O-methylated compound, even in the presence of additive’s such as Mg(OMe)2 that promote formation of the required N-alkylated product (N:O alkylation ratio 78:22, DMSO, 60°C).2 Interestingly, repeating the alkylation reaction with the C-4 (4-fluorobenzylamine-) amide side chain in place gave a similar ratio of regioisomers, however heating the reaction mixture for an extended length of time results in iodide-mediated demethylation of the O-Me derivative (re-generating MeI) and drives full conversion to the required N-methylated product. Ester (4) has limited stability over the extended heating time so could not be used under similar conditions. Trimethylsulfoxonium iodide was used as the methylating agent due to ease of handling.3 Limitations of this method include the toxicity of the alkylating agent and poisoning of the down-stream catalytic hydrogenation step by entrained sulfur-based impurities. 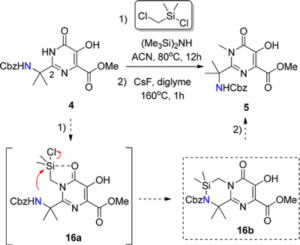 A recent publication highlights an alternative 2-step (1 pot) procedure that is not only mechanistically interesting, but furnishes the N-methylated intermediate (5) selectively with reduced environmental impact (Org. Process Res. Dev.2017,  21, 1413). The procedure is based on some work by Taylor etal and involves activation of an amide with HMDS, followed by transilylation with chloromethyldimethylsilyl chloride and intramolecular O-alkylation to give a cyclic penta-coordinate silicon intermediate (13, Figure 2). This undergoes a Chapman-type rearrangement to (14). Treatment with caesium fluoride produces the N-methylated amide.4 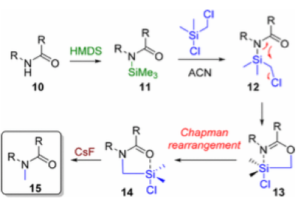 The team from Pharmathen used a similar approach with amide (4) to generate the intermediate (16b, Figure 1). The reaction was optimised, and potassium fluoride was used in place of the caesium salt for desilylation. Yields approaching 80% were acheived and importantly low levels of the O-alkylated pyrimidone were observed (<0.01% w/w). In an extension of the methodology installation of the C-4 (4-fluorobenzylamine-) amide side chain was possible using the silicon-based intermediates 16a or 16b (4-FBA, Et3N, MeOH, 65°C) before fluoride mediated desilylation.