Photochemistry has to me always seemed to be an area whose potential for industrial manufacture has never been realized. I may be biased (I did my PhD on photochemistry from 1967-1970) but I feel the tremendous synthetic potential of photoreactions has not been exploited enough.  One of the reasons is that scale up of batch processes is a problem since the fouling of reactors takes place in the vicinity of the light source and slows the process. Nevertheless the manufacture of steroidal type molecules  such as Vitamin D is carried out industrially on very large scale. 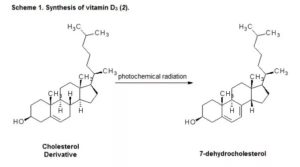 With the introduction of newer photochemical flow reactors there has been a renewed interest in photochemistry and recently there have been some excellent reviews on progress in an issue of Chemical Reviews in late 2016. (see for example R Remy et al Chem Rev 2016, 116, 9816-9849). An example of the complexity that can be made from simple molecules is shown below.

Some interesting photochemical reactions can even be achieved using solar photochemistry where the design of the reactor is specifically tuned to absorbing high levels of ambient radiation (see examples in  M. Olgemoeller, Chem Rev 2016, 116, 9664-9682). 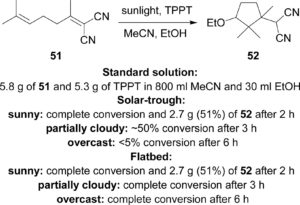 Thus the prediction of the great Italian photochemist, Giacomo Ciamician in 1912 may now begin to come true.

“On arid lands there will spring up industrial colonies without smoke and without smokestacks, forests of glass tubes will extend over the plains, and glass buildings will rise everywhere; inside of these will take place the photochemical processes that hitherto have been the guarded secret of the plants, but that will have been mastered by human industry which will know how to make them bear even more abundant fruit than nature, for nature is not in a hurry and mankind is.”