The use of fluorine and fluorine-containing functional groups in medicinal chemistry, agrochemicals and advanced materials has grown over the past fifty years.1 Not surprisingly this increase in utility tracks with notable developments and refinements in safe and accessible synthetic methodology, both on the discovery and development front and in subsequent manufacturing. A recent example that caught my eye is the aryl-pentafluorosulfanyl (ArSF5) group.2 Some reasons why it’s interesting a bit later- but to start let’s first focus on synthetic history.

First reported in the 1960’s by Sheppard working at DuPont,3 difficult and intractable synthetic methods and hazardous chemistry coupled with subsequently unfounded reports of hydrolytic instability condemned it to the chemical curiosity archives, where it remained for the next 40 years.4

A key breakthrough in advancing the state of the art came from the Umemoto group in 2008 with the development of a two-step route to Aryl-SF5derivatives involving initial formation of an Aryl-SF4Cl intermediate (aryl disulphide, Cl2, KF or CsF, CH3CN) and subsequent halogen (Cl/F) exchange using a Lewis acidic fluoride source such as ZnF2, AgF or HF. This patented process was published in 2012 and gives good yields for formation of the initial chlorinated intermediate and modest yields for introduction of the final fluorine atom.5 The mechanism of this process is shown below (Figure 1). The trans– sulfur stereochemistry predominates and is configurationally stable.6 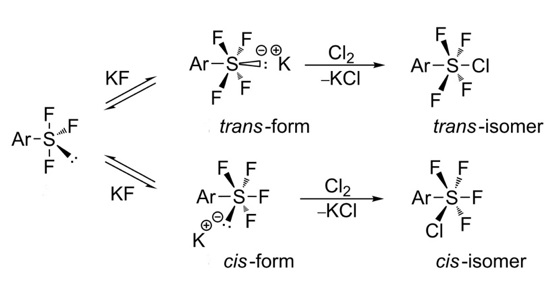 Figure 1: Conversion of an aryl disulphide to intermediate ArSF4Cl

In a recent improvement of this process, circumventing the need for chlorine gas and the inherent mass transfer issues with scale-up of these type of processes, Tongi and Pitts have published a paper using TCCA (trichloroisocyanuric chloride) as a easy to handle solid chlorinating agent in combination with KF and catalytic acid to generate the key ArSF4Cl intermediates.7 The paper also describes conversion of the chlorinated compound to the Aryl SF5several different methods used historically by other groups.

So why the interest in this substituent? Often referred to as “super-trifluoromethyl” the SF5group is larger in volume (driving steric effects in chemistry and biochemical interactions) and more lipophilic than CF3. It is also a stronger electron withdrawing group both by resonance and induction and, despite those stability concerns I eluded to earlier, it is chemically (and thermally) inert, including during exposure to some extreme reaction conditions such as nitration, metallation and oxidative processes.8 Synthesis of some useful building blocks incorporating an aryl SF5substituent are listed in reference 8. Aryl SF5derivatives have a higher dipole moment than the corresponding trifluoromethyl compounds (2.60 D for benzotrifluoride v’s 3.44 D for the SF5derivative- for reference a nitro group falls in the range 3.5-4.0 D). These properties have been exploited in liquid crystal research and in fine-tuning the physical and electronic properties of molecules in drug and agrochemical development.9 Direct replacement of CF3with SF5 often improves the physical properties and in vitro activity of small molecules, especially where activity is correlated with lipophilicity.9

SF5analogues of the anti-malarial drug Mefloquine and the SSRI antidepressant Fluoxetine10 as well as agrochemical compounds such as Fipronil and Trifluralin11 are described in the literature (Figure 2). A recent publication by Cobb describes synthesis of SF5containing aromatic amino acids- a sure sign that peptide derivatives are not too far away (Figure 3).12 The SF5 group has been investigated as a direct replacement for tert-butyl, halogen and nitro functional groups.13 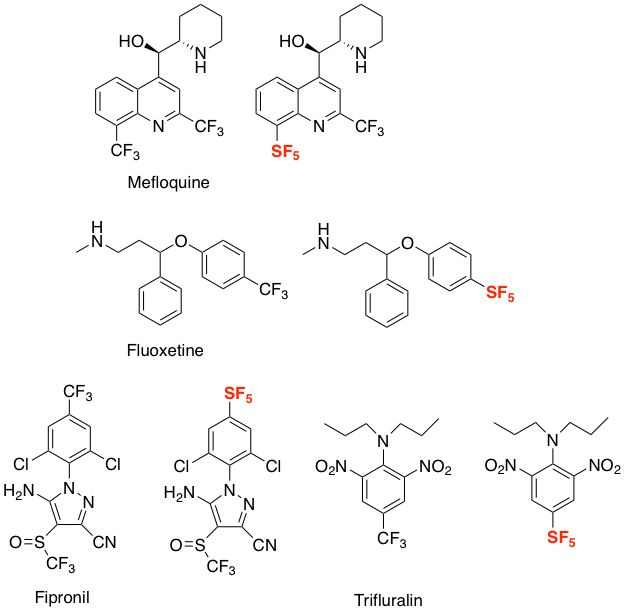