Continuous Photo-Oxidation in a Vortex reactor

Photochemistry is an attractive synthetic method but has not been used widely in industry, except for one or two special processes. In batch processes, the efficiency of light usage is poor, partly owing to the reactors becoming fouled up in the region of the lamp and continuous processes should have more favourable characteristics. There has been a recent upsurge in the interest in photochemistry and a whole issue of Chemical Reviews was devoted to the topic in 2016 (pp  9683-10341). In addition, a short review by Pagliaro in OPRD (2016, 20, 403-408) highlighted the industrial potential.

Photochemistry is also benefitting from the uses of new light sources, such as LEDs, and from innovative reactor designs. A recent paper from the University of Nottingham describes a photoreactor that is useful in photo-oxidations, using air drawn from the laboratory. Reactions using oxygen are attractive industrially since they are atom economical and environmentally friendly, but scale up of oxidations can be problematic, particularly when flammable solvents are used.

The Nottingham group describes a novel reactor with a large liquid volume and a small gas phase volume but with a high interfacial area because the gas is present as very small bubbles. The Vortex-type reactor is very efficient and has been used in a number of photo-oxidations, including the photo-oxidation of dihydroartemisinic acid to the antimalarial artemisinin, which is obtained in up to 50% yield in toluene as solvent.

The well known process is a complex 3 step sequence involving a photo-oxidation, followed by a Hock cleavage and rearrangement of the hydroperoxide and finally, an oxidation with triplet oxidation as shown in the scheme below. 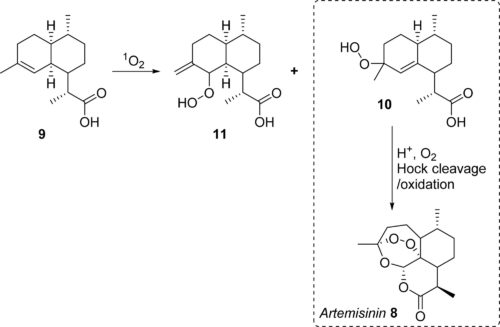