3 cocrystal API’s now on the market

There are now 3 cocrystal API’s (Entresto, Suglat, and Depakote) on the market meaning that this area is no longer just an academic curiosity.

Entresto is a cocrystal formed from the sodium salts of sacubitril and valsartan, but I do not know whether that is affected by the current furore over N-nitrosoamine impurities found in Valsartan.  Suglat is a cocrystal of proline and ipragliflozin. While Depakote is a cocrystal comprised of valproic acid and sodium valproate.

I have recently come across 3 examples of cocrystals, two related to resolution of API intermediates and the other from the material science area.

At the recent Scientific Update conference on Polymorphism and Crystallisation in Boston, MA David Maillard from Merck, Darmstadt described the resolution of an intermediate en route to R-Praziquantel1 (see Scheme 1 below).

Scheme 1: Resolution of a Praziquantel intermediate

Using 1 equivalent of R-naproxen as the resolving agent gave very good resolution but the isolated slat was found to be a cocrystal formed from the desired salt and another molecule of R-naproxen.  This was great news from a cost perspective because all the naproxen ends up in the isolated intermediate making recovery and recycle much simpler than if half had remained in solution as part of the unwanted diastereomeric salt.

At the same conference Andréde Vries from Innosyn gave a presentation on Viedma ripening or attrition enhanced deracemization2.  This is where grinding a racemate gives a single enantiomer which sounds good, but the compound must crystallise as a conglomerate and must be epimerizable.  As it would happen I have just read a paper in Angewandte3 describing the work on the Viedma ripening approach to producing a single enantiomer of Mefloquine. Mefloquine it self is not a suitable substrate so they examined various derivatives and found one salt of a ketone derivative which was suitable (see Figure 1). 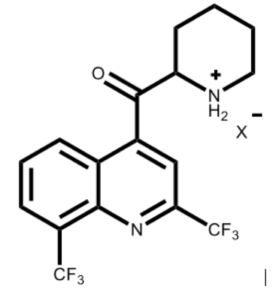 34 Salts were prepared and screened, but only the biphenylsulfonic acid salt possessed the right properties, i.e. formed a conglomerate.  The salt turned out to be a rare example of a cocrystal slat hydrate that is also a conglomerate.  In this case the solid contains 2 biphenylsulfonic acid molecules and two water molecules for each Mefloquine ketone.

And finally, another paper published in Angewandte describes the preparation of radical-radical cocrystals such as the one shown in Scheme 2, which are of interest as organic ferrimagnetic materials.