At the Scientific Update OPRD conference in Milan earlier this month, Xiaohu Deng from Kura Oncology discussed a pyrimidine-derived diazo intermediate that exists predominantly in the tautomeric ‘tetrazole’ form at equilibrium in solution.[1] The compound was shown as a putative retrosynthetic building block for synthesis of a J&J P2X7 antagonist (Figure 1).[2] I’d not come across this type of structure before and wanted to find out a bit more about it. I thought it was interesting since resonance stabilization would most likely impart increased thermal stability making compounds of this type easier and safer to handle (phenyl diazomethane, a compound I used extensively during my postdoc, is much more stable than diazomethane for example).

A quick literature search turned up a very recent paper that describes the synthesis and azide/tetrazole equilibrium for a couple of substituted 2-azidopyrimidines, both for the neat compound and in solution in various solvents.[3] Around the same time a paper was published by Ma etal from the University of Science and Technology in Anhui, China reporting a stable, crystalline triazene-derived diazotransfer reagent (2-azido-4,6-dimethoxy-1,3,5-triazine, ADT) that allegedly is intrinsically non-explosive and proved robust against a battery of safety tests including heat, friction and impact (J. Org. Chem. 2018, 83, 10916). Diazo transfer chemistry, using ADT and base in DMSO at room temperature, gives high yields of (stabilized) diazo compounds (Scheme 1). Presumably resonance stabilization effects through the triazene nitrogen atoms in ADT impart similar stability to the pyrimidine derivative discussed above.[4]

ADT is made by reaction of 2,4,6-trichlorotriazene with methanol, to install the two methoxy groups, followed by treatment with sodium azide in aqueous acetonitrile (Scheme 2). The modular nature of the synthesis lends itself to further development of the reagent- perhaps adding additional solubilising groups through the ether linkage or attaching to a resin. The stability of the reagent could also, in theory, be ‘tuned’ through additional substitutions (higher molecular weight tends to increase azide stability).  The thermal (DSC) and gravimetric (TGA) analysis of the compound shows a melt at around 85°C leading into a decomposition which peaks at 174°C. The TGA shows weight loss beginning around 100°C. The energy for the decomposition (30 kj mol-1) is, however, relatively modest.  As with all these materials, thorough testing by the end user in the context of the process you want to run is essential. Batch variation or different impurity profiles can have an impact on the thermal stability and decomposition onset temperature.

In terms of synthetic utility, a combination of highly polar solvents (DMSO preferred) and sub-stochiometric inorganic bases (40 mol%, NaHCO3 preferred) gave high yields of diazo product with beta-ketoesters, diketones and phosphonates. Reaction times are very short- generally a few minutes at room temperature. The ADT reagent is stable with respect to strong inorganic base (KOH), enabling substrates with a higher PKa to react- ethyl phenylacetate gave 92% yield using solid KOH. Sulfonylazide based diazo transfer reagents show reduced stability under strongly basic conditions so there is an advantage in using ADT in this case. Another notable example is indene, which gave the diazo hydrocarbon in 70% yield using KOAc as base. However other non-activated ethylene compounds (those unable to form an enolate) gave no diazo products.  Head to head comparison of ADT with a range of structurally diverse diazo transfer reagents using ethyl diazoacetate as substrate is included in the paper, together with empirical stability data for each of the reagents.

Mechanistically the reaction proceeds as one would expect- attack of the base-derived enolate of the substrate on the terminal diazo- nitrogen and subsequent base-assisted fragmentation of the tri-nitrogen species with loss of 4,6-Dimethoxy-1,3,5-triazin-2-amine. The latter is referred to as a ‘hydrophilic by-product, which can be easily separated from diazo product’. In reality it’s a column which is obviously not ideal for scale-up.

In general, it looks like another reagent for the toolbox. If it really has safety advantages over its peers, it could have a bright future. But please heed the warnings above- academic papers are not always the most reliable sources of robust safety information, especially where the authors are waxing lyrical about their new baby. 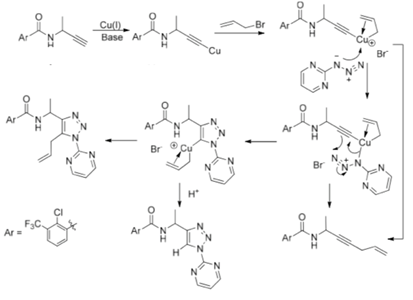