What is the simplest marketed therapeutic?

Lithium, first member of the group 1 alkali metals, was discovered in 1817 by Johan August Arfwedson. It’s been around since the dawn of (astronomical) time- both stable isotopes, Li6 and Li7, being among a small handful of elements created in the Big Bang.1Terrestrially its highly abundant in seawater (up to 7ppm), particularly around hydrothermal vents. Despite being the 25thmost abundant element in the Earth’s crust, at around 20ppm it’s still regarded as comparatively rare- most likely because the concentration of lithium containing minerals is low. Spodumene (LiAl(SiO3)2, Figure 1) and Petalite are common mineral sources. Over 40,000 tonnes of Lithium were produced worldwide in 2017- the richest sources being Australia (43%) and the salt flats of Chile (33%). The estimated global reserve is 53 million tons. World demand for the metal is largely driven by its use in batteries (46%) and glass/ceramics (27%).2 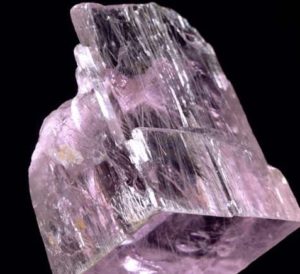 Our teaser question- “What is the simplest marketed therapeutic” stems from the use of Lithium as a pharmaceutical to treat mood disorder. In 1948 John Cade, an Australian psychiatrist, discovered that lithium carbonate was efficacious in stabilizing the mood of patients suffering from bipolar disorder and mania, and in 1970 it was approved by the U.S. FDA for treatment of this restricted group of mental disorders. It remains the best in class treatment to this day.3

The precise mechanism of action remains unclear and is most likely a combination of effects. How a single atom can be used therapeutically so successfully is remarkable. Lithium is known to induce multiple effects on neurotransmitter/receptor mediated signalling, signal transduction cascades, hormonal and circadian regulation, ion transport and gene regulation.3 For many years it was believed that efficacy was driven through inhibition of the enzyme GSK-3b (GlycogenSynthase Kinase 3). Lithium chloride was the first GSK-3 inhibitor to be discovered (Figure 2). Several ideas were postulated for its mode of action, including competition for magnesium and inhibition of potassium deprivation.4 The non-hydrated ionic radius of lithium is similar to magnesium (II), so much of its activity may indeed stem from competition with Mg2+. More recently it has been proposed that lithium restores the function of CRMP2- an intercellular protein that regulates neural networks.5 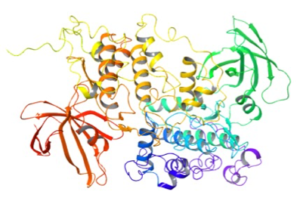 An interesting twist on the possible role of lithium in the CNS comes not from biochemistry but quantum neuroscience. The idea came from a paper published in 1986 by a research team at Cornell University, describing separateadministration of the two stable isotopes of the metal (7Li and 6Li) to rats and observation of behavioural differences in the two groups of animals.6 The natural isotopic ratio is 92:8 in favour of 7Li. The paper described a remarkable finding- that mother rats receiving 6Li showed much stronger maternal behaviours, such as grooming, nursing and nest-building, and were much more alert than the rats in either the 7Li or control groups.In 2013 theoretical physicist Mathew Fisher at the University of California, Santa Barbara, claimed these observations could be interpreted by quantum effects in the brain. Fisher proposed that the coherence time of the nuclear spin of 6Li, which when solvated in water is remarkably long at around 5 minutes,7 is sufficient to exploit some quantum phenomenon that might account for the observed effect on mood. 7Li has a much shorter coherence time- only 10 seconds. Fisher suggested that the isolated nuclear spin could serve as a putative ‘neural qubit’ (or unit of quantum information) and that entanglement and quantum processing in the brain could somehow transduce into neurotransmitter signalling. So confident was he in his idea that he filed an invention patent entitled ‘treatment for depression and other mental conditions with synthetic isotope-modified lithium’.8 As we all know it’s not possible to patent an element. However, a new use or unexpected benefit might prove sufficiently novel over the existing prior art.

Fisher’s research moved on to quantum cognition with so called ‘Posner molecules’, Ca9(PO4)6, which can be found in bone and to a small extent in extracellular fluid. These molecules contain a well shielded phosphorus atom that again has a long coherence time and might facilitate quantum processing.9

There are other parties interested in the lighter isotope of lithium however. Isotopically enriched 6Li deuteride (LiD) is the fusion precursor used in thermonuclear weapons. High energy neurons produced from fission explosion of a 235U trigger are absorbed by the 6Li nucleus resulting in decay and generation of helium and Tritium (Figure 3). Tritium fuses with deuterium releasing helium and more neutrons that are absorbed by a 238U shell, converting uranium to plutonium. The fusion reaction produces an unimaginable amount of energy in a fraction of a second- akin to the process that powers the sun and stars. A second fission process splits the plutonium nucleus releasing even more energy. 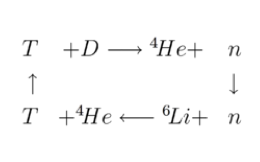 By the end of the Cold War the US military had extracted and enriched 6 Li from tens of thousands of tonnes of lithium salts for use in stockpiled nuclear weapons. Fisher may have a few visits from these other ‘interested parties’ if he begins manufacturing 6Li for medical proof of concept studies.10

The chemistry of organolithium compounds is familiar to most organic chemists. The first simple examples (MeLi, EtLi and PhLi) were prepared by Wilhelm Schlenk (yes, the man who developed the Schlenk tube) over 100 years ago in 1917.11 As if high reactivity and spontaneous ignition in air weren’t enough to contend with they were prepared by transmetallation of highly toxic organomercury compounds using lithium metal. Fortunately, the safer, more familiar procedures using organohalides was developed by Ziegler in the 1930’s. Schlenk, together with Witting and Gilman went on to demonstrate C-H/lithium exchange and Ziegler further developed carbometallation and addition of organolithium reagents to olefins. This led ultimately to his shared Nobel prize with Natta in 1963 for ethene polymerization.11

Many simple organolithium compounds are soluble in inert hydrocarbon solvents, however reactions are generally carried out in ether-based solvents in which the oxygen atom is a Lewis donor and can coordinate to the lithium atom, modifying both the reactivity of the organometallic and its solubility. This is something of a double-edged sword since the C-H bond of adjacent alkyl side chains is weakened facilitating ether bond cleavage by elimination or Wittig-type re-arrangement. THF is known to ring open with n-BuLi viaan a-metallation followed by [4+2] cycloreversion generating ethene and acetaldehyde enolate (Figure 4).

In solution and in the solid state organolithium compounds are known to aggregate, forming mainly hexamers and tetramers (Figure 5), the structure of which depend upon the nature of the ether solvent and/or presence of Lewis bases such as TMEDA (L in Figure 5). Further details can be found in the accompanying references.11 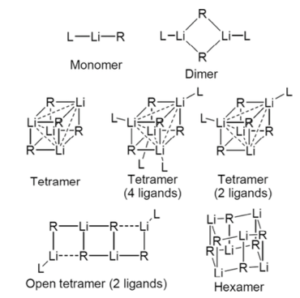 A few other interesting facts about organolithium compounds- reaction with oxygen generates initially an alkyl peroxide that reacts rapidly with additional alkyllithium reagent generating, in the case of nBuLi the Li butanoate by auto-oxidation. Decomposition of organolithium compounds can occur viaa b-hydride elimination pathway. Absence of a b-proton generally results in greater stability, an example being MeLi. Alternative decompositions pathways in this case are largely driven through a demetallation mechanism.

Reaction of alkyllithium reagents with water is also not for the faint hearted. It usually involves a lot of heat and a smattering of flames. Not something you really want to do. Removal of traces of water from any reagent or solvent is a basic requirement of most organometallic processes. Or so I thought. A recent preprint paper by Capriati etal with thesomewhat unlikely title ‘Water and sodium chloride: essential ingredients for robust and fast Pd-catalysed cross-coupling reactions between organolithiums and (hetero)aryl halides.12

So just add to a solution of catalyst in salty water in an open vessel? Apparently so! They describe addition of a hydrocarbon solution of the organolithium reagent to a stirred mixture of halide in salty water and hey presto! (Figure 6). The organolithium reagent is presumably protected in a hydrocarbon solvent-derived micellular matrix (facilitated by sodium chloride?) in which a veryfast Pd-catalysed cross coupling reaction takes place ‘on water’- faster than destruction of the organometallic.13 What’s next? Perhaps we can persuade enzymes to play ball and we’ll be reading about enzyme catalysed addition of organolithium reagents to ketones and imines!

Figure 6: water ‘on water’ in the presence of NaCl

I hope you’ve enjoyed this post on Element number 3. Please check back again soon for another instalment. We’re doing it periodically- on the table!

Lithium by the numbers: