Which metallic element, central to the activity of the marine algal enzyme bromoperoxidase, is slowly converting 120 billion tons of bromide ions into organobromine compounds in the world’s oceans ?

Vanadium, a group 5 transition metal, discovered in 1801 by Andres Manuel del Rio, occurs naturally as a component of vanadinite (Pb5(VO4)3Cl), one of the main industrial ores used as a source of the metal. Over 60 ores are known, with 70-80 thousand tonnes of ore mined globally each year, producing 7-10 thousand tonnes of refined vanadium. Crystals of Vanadinite deposit as beautiful red hexagons (Figure 1).1 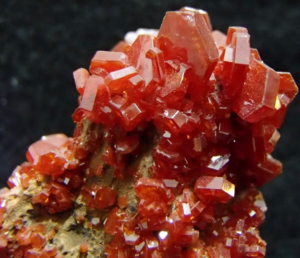 Figure 1:  Vanadinite is an important industrial source of Vanadium

Vanadium is the 20thmost abundant element in the Earth’s crust (concentration 160 ppm). Vanadate salts are highly soluble and cycle through the natural environment rapidly. The concentration in sea water is 1.5 ppb and the metal is actively taken up by certain marine algae. The bromoperoxidase (BPO) enzyme(s), responsible for the oxidation of bromide to hypobromite (or to an enzyme-bound bromine complex) have been isolated from nearly 100 species of marine algae and phytoplankton. Many other organisms use vanadium for activity of key proteins including terrestrial lichen, bacteria, an acorn worm, and a marine annelid. Its estimated that bromoperoxidase, is slowly converting a staggering 120 billion tons of bromide ions into organobromine compounds in the world’s oceans.2

Discovered over 30 years ago and extensively characterised,3 the central function of haloperoxidases is to remove hydrogen peroxide, a byproduct of photosynthesis, from the cellular environment. The enzyme active site contains an oxo-vanadium species bound to a histidine residue in the protein backbone. The enzyme catalyses the oxidation of bromide by hydrogen peroxide to a highly reactive bromonium ion that is trapped by the vanadyl oxygen atom, generating a hypobromite species (Figure 2).4 This electrophilic bromine source reacts with hydrocarbons generating organobromine compounds. Around 60 thousand tons of bromoethane alone are produced annually, with more complex organobromine compounds also produced in large volumes.5

In addition to haloperoxidases, vanadium-containing nitrogenase enzymes are an alternative source of ammonia via nitrogen fixation in environments were bacteria are unable to utilise molybdenum.6

In industrial chemistry, arguably the most important global application of the metal is the manufacture of sulfuric acid by the Contact process. Vanadium pentoxide catalyses the aerial oxidation of sulphur dioxide to sulphur trioxide, a reaction run industrially to produce in excess of 150 million metric tons of sulfuric acid annually (2001 data). The process was invented in my home town, Bristol UK, in 1831 by a vinegar maker-Peregrine Phillips.7 The reaction is performed between 400 and 620 °C; below 400 °C the V2O5 is inactive as a catalyst, and above 620 °C it begins to break down. Sulphur dioxide is prepared by burning elemental sulphur in air and the concentration of SO2 in thegas stream entering the catalytic converter can be determined using the Reich test. In my early years as a chemistry technician I remember running these tests on a plant based at what was then RTZ chemicals in Avonmouth, Bristol. It wasn’t a particularly pleasant task as I recall. Sulphur dioxide tended to destroy clothing, despite full PPE and respirators.

Vanadium itself is used industrially for many purposes, including vanadium steel (probably its major use). Additional applications being explored include new catalytic processes, batteries, qubits and MOF’s.8

Vanadium is an essential trace element for life, with around 20mg present in the human body. The precise function remains undetermined; however, it is known to induce adenylate cyclase, an enzyme involved in conversion of ATP to cAMP.9 Medically, vanadium compounds have been proposed as treatments for diabetes, cancer and parasitic diseases, however the structural similarity of vanadate and phosphate lends itself to off-target toxicity. In addition Fenton-type chemistry and oxidative stress, resulting from the generation of oxygen radicals, is potentially limiting for chronic administration of metal derivatives. Vanadate(V) salts have been used as inhibitors of phosphatase enzymes and as probes to study the mechanism of action and catalytic activity (Figure 3).10 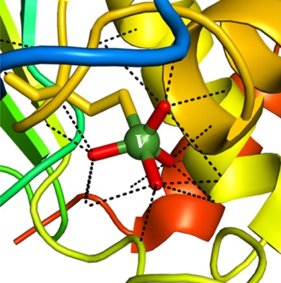 From the point of view of organic synthesis, vanadium redox chemistry has been exploited and fine tuned by design of appropriate ligands.11 Vanadium can exist in oxidation states from -3 to +5 and undergoes one electron redox processes relatively easily. In particular the higher oxidation states induce useful oxidative transformations. A particular favourite of mine is its application in the oxidative coupling of arylglycine containing peptides by David Evans in synthesis of the macrocyclic actinoidinic-containing Vancomycin subunit.12 Here VOF3/BF3.Et2O was used successfully to close the macrocycle as a single atropisomer in the ‘unnatural’ biaryl configuration. A recent pre-print paper by Takizawa describes a similar approach using chiral dinuclear vanadium complexes in phenolic couplings generating axially chiral resorcinols in high ee (Figure 4).13aA mechanistic study of the coupling has recently been published by Kozlowski.13bHalogenase enzymes such as BPO have also been refined and engineered for use in chemical synthesis and remains an interesting area of research.4

I hope you found our first element article interesting. Please check back soon- we’ll leave space at the table for you!

Vanadium by the numbers: